Creation of ABLBLALAB and Mémoire du Mile End, this treasure hunt takes place in the neighbourhood in order to bring to life and discover the stories and characters that have enriched this neighbourhood since __________ . As a first winter departure, literary ___________ serve as clues to the plots and then go through __________ and __________ ! First version winter 2016: Departure at the Mordecai Richler Library official meetings: 27 February 2016 at 11 a.m. and 2.30 p.m.
Type of public: All ages
To bring: warm clothes, curiosity, sense of team and adventure duration: 1h30-2h Maximum number of participants: 30-40 people per session
part of the festival Montréal joue festival Montréal joue

made in collaboration with: 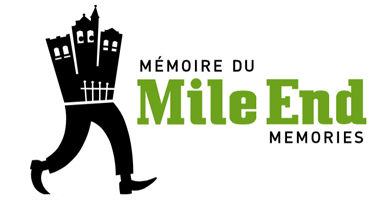 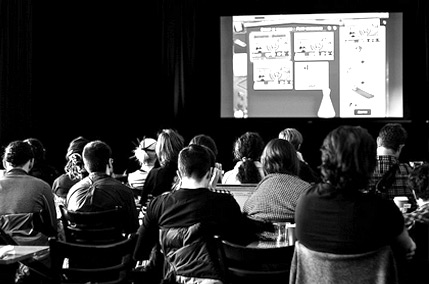 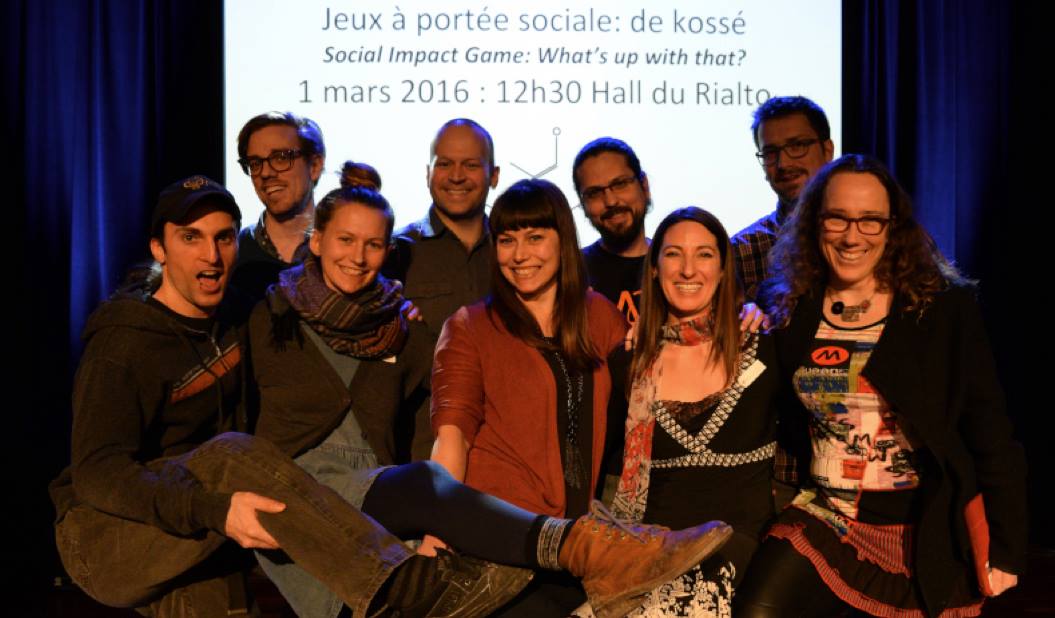 Six conferences on the subject, starting at 12 h 30 until 7 pm at Rialto Hall.
The social game movement is gaining in popularity thanks to, among other things, the rise of civic, humanitarian and community involvement, evolving technological accessibility and the growing expertise in game design.This day of conferences and networking is aimed at all audiences interested in this growing movement where speakers Alexia Bhéreur-Lagounaris, Laurent Gosselin, Caroline Julien, Sébastien Savard, Pasccal Nataf, Jodee Allen and Attila Szantner will present a panorama of examples of social games. Therapeutic games, educational games, table and physical games, and the new gamified citizen science project: Massively Multiplayer Online Science A CITIZEN SCIENCE PROJECT WITHIN THE EVE Online GAME.
Article on the subject : Is Citizen Science Gaming the Next 'Level Up' for Social Impact Games? Crossing Public Involvement, Technological Accessibility and Game Design
Article Published by Interdisciplinary Press, Oxford.

KESSTATEND/WHAT ARE YOU WAITING FOR?

Le 28 mai 2016 rue St-Viateur MILE END EN FLEURS
For the annual event MILE END EN FLEURS on St-Viateur Street on Saturday May 28, 2016, the organization Rue Publique  solicited ABLBLALAB. They had come to our treasure hunt Les mille Fins. They loved it. But we already had the congress event at the same time and there was not enough time to do a treasure hunt worthy of the name. What can be done? We racked our brains... And Eureka! We invented a literary game in the manner of an exquisite corpse, to read the waiting line of flower distribution. Result? We unveil the collective work by the 102 participants soon! St-by...Drum roll.... 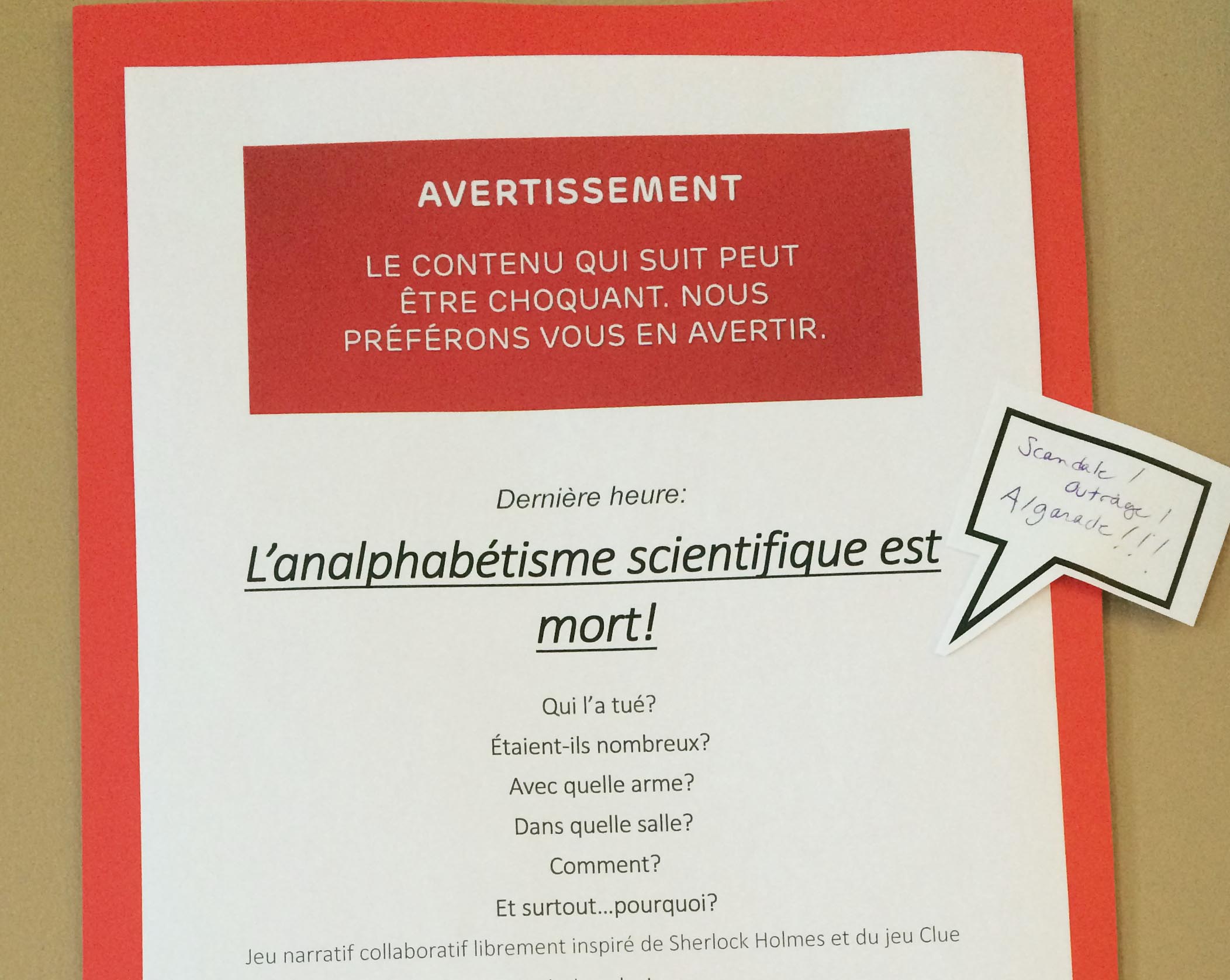 Le 27 et 28 mai 2016 au Centre Urbanisation Culture Société de l'INRS
The Congress of the Association of Science Communicators (ACS), which took place on 27 and 28 May 2016, had as its theme: Combating scientific illiteracy. ABLBLALAB has developed 3 different games around the targeted concept, to stimulate networking and reflection through narrative collaboration. 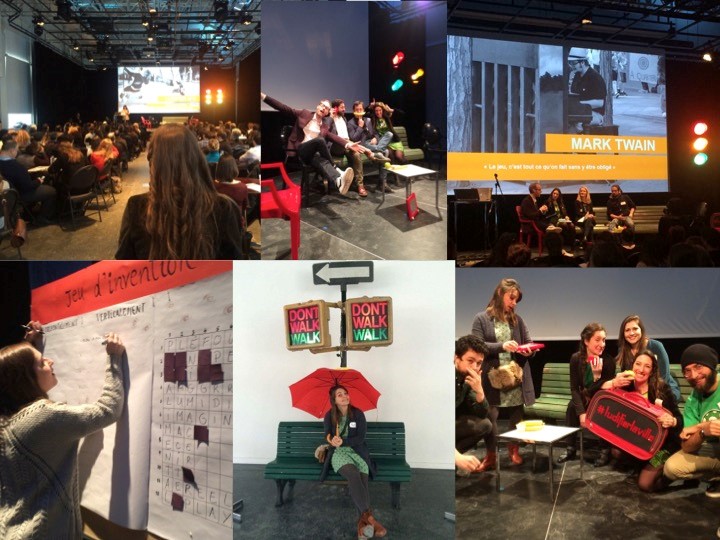 Le partenariat du Quartier des spectacles asked Alexia Bhéreur-Lagounaris to present the key elements of gamifying public space from her conference: "The stakes of public space gaming: or what Pokémon Go can bring to the urban laboratory" and ABLBLALAB gamified the conference day. The playfulness was in the animation, in the musical framework of the conference, in the games offered to link topics for reflection and in the scenography and set accessories.
Febuary 10th, 2017 at l'Agora de l'UQAM
Program detail of "ludifier la ville"
On the same subject:
Pokémon Go: les enjeux au-delà du jeu
Report Marie-Laure Josselin, Radio-canada Premiere